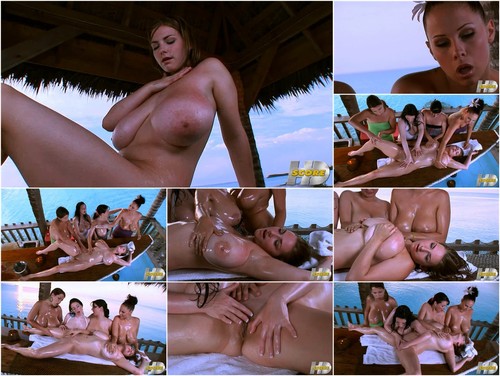 September 29th, 2013
In this tropical paradise, Christy Marks is on a terrace overlooking the ocean. She dabs some water on her big tits and lies back on a table. As Christy begins to feel herself up, eight hands appear to massage her all over with oil. Gianna is by Christy’s head. Lorna Morgan by Christy’s boobs. Angela White is next to Lorna and Terry Nova is by Christy’s legs. All four of them are rubbing Christy into outer space with oily hands, playing with Christy’s soft, pliable hooters. As her fellow babes massage her from head-to-toe, they work their way to Christy’s shaved, pierced coonie. The heat and the hands-on fondling and caressing by these four tit-goddesses cast their tingling spell as Christy trips out on waves of intense pleasure while the sun sets in the horizon.